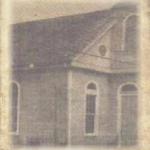 This old historic church was founded in the year of 1869 and the plot of ground on which it is erected was purchased from the late William Jackson and his wife, Minerva, who were the parents of our late Mother Margaret Shepherd.

This church was then known as THE FIRST BAPTIST CHURCH. After a division it was called Second Baptist Church, and later it was given the name it bears at present, the SECOND FREE MISSION BAPTIST CHURCH. The first structure was destroyed by storm. Shortly afterwards it was rebuilt.

Rev. Moses Jackson was the first pastor, and a great preacher was he. After serving as pastor for some years he returned to his native home in Virginia in the year of 1871.

Then came the Rev. Henry Davis, who was a gospel preacher and evangelist. Rev. Davis was called to the Great Beyond on December 16, 1888. Although asleep, he is not forgotten.

Later came the Rev. H.C. Foster, a man among men and a mighty preacher. Many were called to the light of God through his preaching. During his administration new pews and pulpit furniture, a metallic ceiling, and bell were purchased. All were used until demolition of the old building in early 1979. Rev. Foster died in September of 1911.

Following the Rev. Foster came the Rev. William Underwoods. He was a giant in the ministry and a pulpiteer. He left to attend the National Baptist Convention and failed to return. In the same year came the Rev. Nelson Maker, a son of this church and truly a Christian gentleman. He labored with us for a while, then erected the Morning Star Baptist Church.

Shortly after Rev. Maker came the powerful Rev. F.W. Scott, from Eunice, Texas. A tall oak was he. The church hall and parsonage were built under his administration. For eight years he served as pastor.

In 1933 came the Rev. H.P. Williams from Gulf Coast. He was a fine speaker. Rev. Williams resigned to go back to the Gulf Coast.

On Monday, August 19, 1935, the Reverend James W. Pace, a graduate of Howard University in Washington, D.C. in 1916, became our next pastor. He also studied in Chicago and had post graduate work at Oberlin College. He was a real pastor and a diligent worker. The interior of the church was painted under his administration, but before his plans were completed he was called from labor to reward on September 21, 1936.

Rev. Peter Brown Fortner was also a son of this church and was dearly loved. He too was a great preacher. Rev. Fortner was installed as pastor July 2, 1937. He too made progress as a pastor. Much work was accomplished; this man was a soul winner. He resigned in January of 1944 with five hundred members on the Church Book. However, there were two ordained ministers of the church capable of carrying on the services. They were Rev. George Simon and Rev. H. C. Chambers, the devote husband of Mrs. Rosa Chambers. Rev. Chambers was deeply interested in Missions. We mourned his passing in September 1944.

Many thanks to the cooperative officers and members under the leadership of Mrs. Thalia LeBlanc, Mr. Henry Jamison, Mrs. Mary Murphy, Mr. Henry Williams, Mr. Anthony J. Hackett, Sr., Deacon Wilbur Henderson, deacons, deaconesses and members, Mrs. Ophelia Johnson and members of the Cherry Blossom Club, and other auxiliaries. We rejoice in the God of our salvation for being debt free then.

On the 13th of December 1944, Rev. Murphy W. McCaleb was elected pastor and was installed by the First District Missionary Baptist Association on January 16, 1945. He was a dynamic preacher and builder.

In the June 1950, Rev. Peter Brown Fortner was called back to pastor the Second Free Mission Baptist Church. Rev. Fortner served this church until his death on September 15, 1966.

Rev. Warren Joseph Ray, Sr. was elected pastor of Second Free Mission Baptist Church on March 30, 1967. He was installed on Thursday night, May 11, 1967. Rev. Ray was baptized at Second Free Mission on September 7, 1941. He was a member of and taught in the Sunday School for more than twenty‑five years. He served as Assistant Superintendent for a number of years and was Superintendent for three years. In addition to this, Rev. Ray, Sr. served as a member of the Senior Choir, the Deacon Board and the Trustee Board. He was called to the ministry and was licensed by the church under the administration of Rev. Murphy W. McCaleb on August 17, 1947. When the church was without a pastor Rev. Ray carried on for six months until Rev. Fortner returned in June of 1950. Rev. Ray was ordained to the Gospel Ministry December 16, 1954 by the First District Missionary Baptist Association, Dr. P.W. Raphael, Moderator. Rev. Ray earned the B.Th. and M.Th. Degrees from the Union Baptist Theological Seminary. Rev. Ray earned diplomas from the Voice of Prophesy Bible School of California and from the North American School of Chicago, Illinois. Rev. Ray was a member of the Executive Board of the First District Missionary Baptist Association where he served as Recording Secretary. He was also Secretary‑Treasurer of the Upper City ministers’ Union. God blessed his labor at Second Free Mission until his death on January 2, 1973.   Following the death of Rev. Ray, Sr., the church was in the hands of the Deacon Board, Bro. Louis Alexander, served as Chairman.

On Wednesday night, November 7, 1973, Rev. Warren Joseph Ray, Jr. was elected pastor of the church. Subsequently, he was installed on Thursday night, November 29, 1973 by the First District Missionary Baptist Association, Dr. P. W. Raphael, President, presiding. Rev. Ray, Jr. grew up in Second Free Mission. He started out in the Cradle Roll Department of the Sunday School. Like his father, he was baptized by the late Rev. P. B. Fortner. He was called to the Gospel ministry and was licensed by the church on May 13, 1973. When he was elected pastor of the church Rev. Ray, Jr. was serving on the Deacon Board, the Trustee Board and the Building committee. In addition to serving on various other committees in the church, he was a member of the Select Choir, the Male Chorus, a Sunday School teacher and Superintendent of the Sunday School. Rev. Ray is still carrying on God’s work here at Second Free Mission Baptist Church.

Under Rev. Ray there were changes made in the worship services; training institutes were begun and held twice yearly along with revivals; Vacation Bible School, weekly Bible class, Annual Family Day Observance and other innovation were made.

Under Rev. Ray’s administration, we held ground breaking ceremonies for the new church building on Sunday, November 26, 1978 and the old building was demolished.  We began holding services at the First Free Mission Baptist Church, 919 Adams Street, the Rev. Arthur L. Jones, Pastor. We shall forever be grateful to God for our brothers and sisters in Christ who so graciously welcomed us to the use of their facilities during the construction of our new building.  We thank God that on Sunday, May 18, 1980, we dedicated our new church edifice and burned the note in May 1998.  In 1983 and 1994 the church was successful in acquiring additional property next the church. A lot facing Oak Street was purchased and later converted into a parking lot which was completed in the summer of 2000.  With our most recent acquisition we now have four additional pieces of properties in the immediate vicinity of our church all paid for.

A new sound system was installed in July 1999 and has been upgraded since then.  Other enhancements to the system are planned for the near future.  In 2002 the church and fellowship hall were painted and new carpet installed in the sanctuary.  Over the last several years our church’s music ministry has been blessed by the recent purchase of a new organ and a baby grand piano.  In 2004 we launched our web site.  People all over the world can now visit us online at  www.sfmbc.com.  In connection with our 135th Church Anniversary held in October 2004, we published a cookbook entitled, Cooking with Second Free Mission New Orleans Style.  Many of our members and friends contributed recipes.  The cookbook was so popular, and in response to numerous requests, a second book, Cooking with Second Free Mission New Orleans Style, Volume 2, with all new recipes was released on Saturday, November 21, 2009.  Persons attending the “Food Tasting and Cookbook Release” were able to sample some of the food prepared by the persons who submitted the recipes. Like the first book, the second volume contained recipes submitted by members and friends.

Following Hurricane Katrina, which struck New Orleans on August 29, 2005, many members evacuated the city and the church remained closed for approximately six weeks. The church building received relatively minor damages from the storm.  The roofs on the sanctuary and the fellowship hall were replaced along with some ceiling tiles in several parts of the building.  Since the steeple had to be removed in order to repair the roof properly, a decision was made to replace the 26-year-old steeple.

On Sunday, October 16, 2005, with many members still out of town and scattered all across the nation, we held our first worship service following the hurricane.  Although many members have returned, a large number of members decided not to return to New Orleans to live.  Following the hurricane we continued to minister to our members as well as those from other churches that had not yet resumed their services.

Renovations on the Parsonage/Hall resumed during the latter part of 2005, although at a much slower pace as both workers and material were in short supply.  The building which was expected to be completed in early 2008 was completed and passed various inspections in 2009.  The building was dedicated on Sunday, January 31, 2010.  A special worship service was held at 11:00 a.m.  Following the worship service, members and guests retired to the parsonage/hall for a brief dedication ceremony, tour of the building, and refreshments.

On July 2, 2006, we began a 30-minute radio broadcast which airs on Sunday afternoons and features our Sanctuary Choir and a sermon by Pastor Ray.  People living along the Gulf South can hear and be blessed by the program.  The station also streams on the internet and persons all around the world with internet access may also hear the broadcast.

God has truly blessed Second Free Mission.  As we look to the future, we will continue to stand out in the Carrollton community as an old historic church housed in a new building striving to be more effective in Christian outreach to the community. Christ’s church is built on a sure foundation.

Today, one hundred forty-two years after this church was organized, the congregation is still working for the progress and advancement of the church and for the up‑building of God’s Kingdom.  We at Second Free Mission are glad to be members of it. 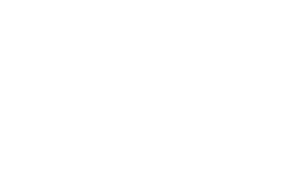 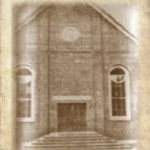